National Institute for Research and Development of Isotopic and Molecular Technologies 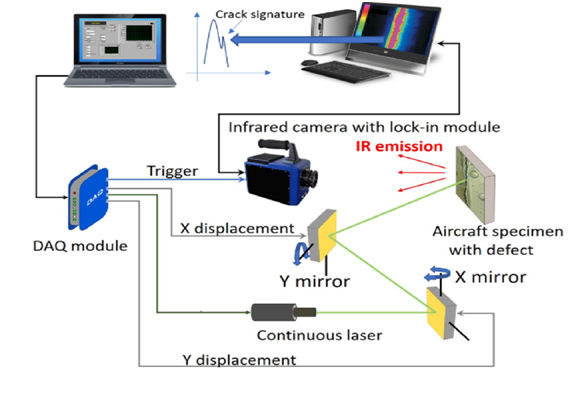 Lock-in infrared thermography (LiT) is a non-contact technique used in the aircraft industry for defect detection. The global concept of the technique developed within INCDTIM Cluj Napoca is visualized and summarized in the left figure. The energy is taken from the external source (e.g. a laser) to create a temperature difference between the specimen and the surrounding environment, and the heat flux is monitored as the sample returns to thermal equilibrium. The cracks act as thermal barriers that create disturbances of the heat diffusion which are then analyzed by an IR camera (FLIR 7200). The synchronous detection module extracts the components from the infrared signal (amplitude and phase) at different excitation frequencies, filtering out the thermal noise. Thus, (LiT) permits to visualize the thermal response of objects with high accuracy, allowing accurate detection of very small signals in overwhelming noise (up to a million times higher in amplitude than the signal of interest). Finally, the thermal signature of the crack is revealed by image processing algorithms. Project responsible – Mihaela Streza.